Serbian Spruce has thin arching branches with a straight trunk. The needles are light-green to blue-green in color. A Serbian spruce is a medium-sized coniferous evergreen tree growing to 65 to 114 feet tall, exceptionally to 130 feet tall, and with a trunk diameter of up to 3.3 feet. The shoots are buff-brown, and densely pubescent (hairy). The leaves are needle-like, 0.4 to 0.8 inches long, flattened in cross-section, and dark blue-green above, and blue-white below. The cones are 1.5 to 2.75 inches long, fusiform (spindle-shaped, broadest in the middle), dark purple (almost black) when young, maturing rved.

A large evergreen tree with a central trunk and dense, ascending, lateral branches from the ground up. The needles are single, somewhat rigid, sharply pointed, spirally arranged on the branches, 1/3"-3/4", dark green to blue green. Black Hills Spruce is noted for its dark green foliage and conical form. They are dense with strong ¾ to 1-1/4 inch needles. The black hills spruce, more commonly known as a white spruce, is a large coniferous evergreen tree which grows normally to 49 to 98 ft tall, but can grow up to 130 ft tall with a trunk diameter of up to 3.3 ft. The bark is thin and scaly, flaking off in small circular plates 2.0 to 3.9 in across. The crown is narrow - conic in young trees, becoming cylindric in older trees. The shoots are pale buff-brown, glabrous (hairless) in the east of the range, but often pubescent in the west, and with prominent pulvini. The leaves are needle-like, 0.47 to 0.79 in long, rhombic in cross-section, glaucous blue-green above with several thin lines of stomata, and blue-white below with two broad bands of stomata. The cones are pendulous, slender, cylindrical, 1.2 to 2.8 in long and 0.59 in wide when closed, opening to 0.98 in broad. They have thin, flexible scales 0.59 in long, with a smoothly rounded margin. 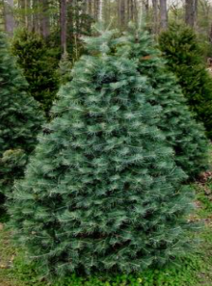 Sheared varieties of eastern white pines are usually desired because of their stereotypical Christmas Tree conical shape, as naturally grown ones can become too thick for larger ornaments or grow bushy in texture. The branches are also widely used in making holiday wreaths and garland because of their soft, feathery needles. The eastern white pine has the distinction of being the tallest tree in eastern North America. Smaller specimens are popular as live Christmas Trees. Eastern Whites are noted for holding their needles well, even long after being harvested. They also are well suited for people with allergies, as they give little to no aroma. A standard 6-foot (1.8 m) tree takes approximately 6 to 8 years to grow in ideal conditions. 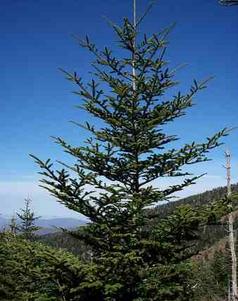 Concolor Fir is a favorite Christmas tree among discerning buyers. The needles of the are silvery blue to silver-green; flat; blunt; 2 to 3 inches long. Concolor fir, also known as a White fir, is popular as a Christmas tree and for Christmas decoration owing to its soft needles, generally excellent needle retention and abundance. The leaves are needle-like, flattened, 1.0 to 2.4 inches long and .08 inches wide by .02 to .4 inches thick, green to glaucous blue-green above, and with two glaucous blue-white bands of stomatal bloom below, and slightly notched to bluntly pointed at the tip. The leaf arrangement is spiral on the shoot, but with each leaf variably twisted at the base so they all lie in either two more-or-less flat ranks on either side of the shoot, or upswept across the top of the shoot but not below the shoot. The cones are 2.3 to 4.7 inches long and 1.5 to 1.7 inches broad, green or purple ripening pale brown, with about 100-150 scales; the scale bracts are short, and hidden in the closed cone. 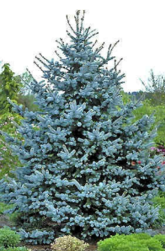 
The Colorado Blue Spruce tree is one of the most popular ornamental conifers. Blue Spruce range in color- from green, green/ blue to silver blue in color. The needles are stiff, prickly and about 1 to 1-1/2 inches in length. The Blue Spruce has a nice pyramidal shape with strong limbs that can hold heavy ornaments. The Blue Spruce is known for its lovely blue foliage which can also appear silvery. Commonly known as a Colorado Blue Spruce is a medium-sized coniferous evergreen tree growing to 82–98 ft tall, exceptionally to 151 ft tall, and with a trunk diameter of up to 4 ft 11 in. The bark is thin and gray, with narrow vertical furrows. The crown is conic in young trees, becoming cylindric in older trees. The shoots are stout, orange-brown, usually glabrous, and with prominent pulvini. The leaves are 1.5 to 2 inches long, dagger shaped, sharply mucronate, lanceolate, sessile, acuminate, deflexed, rigid, coriaceous, somewhat serrulate, very numerus, bright green above and slightly glacous below. The leaves are needle-like, 0.59–1.2 in long, stout, rhombic in cross-section, dull gray-green to bright glaucous blue (very variable from tree to tree in wild populations), with several lines of stomata; the tip is viciously sharp. The cones are pendulous, slender cylindrical, 2.4–4.3 in long and 0.79 in broad when closed, opening to 1.6 in broad. They have thin, flexible scales 20.79–0.94 in long, with a wavy margin. 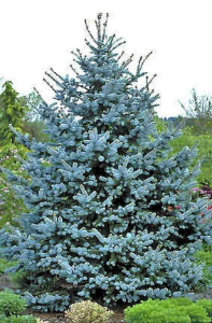 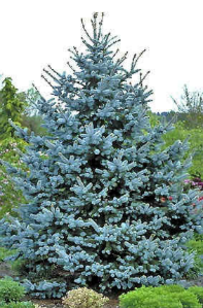 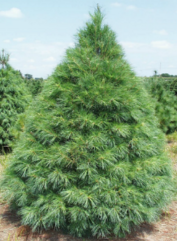 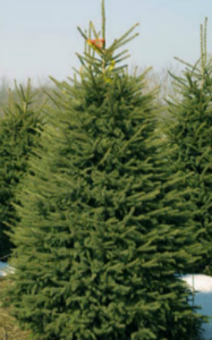 Fraser Fir is widely known as the #1 Christmas tree. Its mild fragrance, shape, strong limbs, and ability to retain its soft needles (which do not prick easily when hanging ornaments) for a long time when cut make it one of the best trees for this purpose Fraser Fir has been used more times as the Blue Room Christmas tree (the official Christmas tree of the President of the United States's White House) than any other type of tree. The Fraser Fir is a small evergreen coniferous tree growing to between 30 and 50 feet tall (rarely to 80 ft) with a trunk 16 to 20 inches across (rarely up to 30 in). The crown is conical, with straight branches either horizontal or angled 40° upward from the trunk; it is dense when the tree is young, but becomes more open as it ages. The bark is thin and smooth, gray-brown with numerous resin blisters on young trees, becoming fissured and scaly with age. The foliage is strongly turpentine-scented.The leaves are needle-like, arranged spirally on the twigs but twisted at the base to spread in two rows; they are 0.4 to 0.9 inches long and 79 to 87 mils of an inch broad, flat and flexible with a rounded or slightly notched tip, dark green to glaucous green above, often with a small patch of stomata near the tip, and with two silvery white stomatal bands on the underside.The cones are erect, cylindric, 1.4 to 2.75 inches  long (rarely to 3.2 in) and 1.0 to 1.2 inches broad (rarely as broad as 1.5 in) broad, dark purple, turning light brown when mature, with long reflexed green, yellow or pale purple bract scales, and often resinous.ur paragraph here.

Norway Spruce is readily identified by its dark green color,and drooping branchlets, . The leaves are needle-like with blunt tips,[7] 12–24 mm (15⁄32–15⁄16 in) long, quadrangular in cross-section (not flattened), and dark green on all four sides with inconspicuous stomatal lines. The seed cones are 9–17 cm (3 1⁄2–6 3⁄4 in) long (the longest of any spruce), and have bluntly to sharply triangular-pointed scale tips. They are green or reddish, maturing brown 5–7 months after pollination. The seeds are black, 4–5 mm (5⁄32–3⁄16 in) long, with a pale brown 15-millimetre (5⁄8-inch) wing.